History
Situational Comedy Theory, or Sitcom Theory is the mathematical expression of the trends of “situational comedies”—that is, a comedic presentation, spanning several televised episodes, revolving around a predetermined situation, and the comedic activities that spring out of the characters of said series dealing with their situations. Sitcom Theory used to employ one or two basic equations to describe the general behavior of sitcoms, using relatively simple math. Modern Sitcom Theory employs the faculties of higher mathematics in order to perfectly, within reason, describe the behavior of sitcoms, with many different related equations, though this article will only cover the basic ones.

During the dawn of the twentieth century, an effort arose, during the mathematics craze, to express language in purely mathematical ways. This led to to the advent of lingual mathematics, which used both numbers and variables to represent lingual patterns and properties. Comediometry (the mathematical study of comedy), one of the fastest-growing subfields of this discipline, hoped to predict those patterns of language that are perceived to be funny, or the general pattern of humor as we know it.

In 1919, John Sketchum, a British professor of Comediometry, developed the Comediometric Theory of Sketch, which described the idea that the humor of a undefined moment is the sum of all segments comprising it. This was the first major development of comediometric science.

With the rise of the sitcom in the sixties, comediometrists tried to explore the sitcom formula. Jeffrey Richards, a student of Dr Sketchum, proposed the First Fundamental Equation of Sitcom Theory: A sitcom’s plot is the nullification of the start of the plot by the end of the plot, or, more simply put, a sitcom’s fundamental situation will not change.

While a rough approximation, The First Fundamental Equation of Sitcoms is filled with errors. Sitcom behavior is not so easy to predict, and Richards himself proposed the First Corollary, which clarifies that this only happens at Standard Television Conditions (STC). Standard Television Conditions were defined in the 1942 International Conference of Comediometry as “episodic, with self-enclosed plots in each episode, broadcasted regularly over week-long, or longer periods.”

Later revisions included the Second Fundamental Equation of Sitcoms. Devised by Frank Calway at the University of California in 1973, the SFE proposed that, at STC, it is the sum of all events till an indeterminate critical point that is nullified by the sum of all events for the remainder of the episode. This formulation provides more accuracy, but in the ever-growing field of theoretical comediometry, and as television continued to develop, this view was quickly realized to be false. It took thirty more years, however, until Edwin Grainger proposed a totally new view of Sitcom Theory in his influential book, Modern Theoretical Comediometry and Situational Comedy Theory: Tracking the Patterns of Sitcoms at Non-Standard Television Conditions. This book proved to remake Sitcom Theory, using higher mathematics, in order to provide accurate descriptions of sitcoms in a changing medium. In his book, Grainger proposes a General Law of Sitcoms, which he describes as a refinement of Calway’s equation, simplifying it, and “making it more accurate for describing the general behavior of sitcoms at STC, so that there is an accurate place to evaluate non-STC equations” (Grainger 48). The GLS states that the sum of points relatively high to the general situation is nullified by the sum of points relatively low compared to the general situation.

For all episodes in STC, the sum of parts of the beginning are nullified by all the points of the end.

Where Pb is the Plot Beginning and Pe is the Plot Ending. A clear example of this is the trope in which a character comes across a stroke of good luck, and for some reason losses it all, voluntarily or involuntarily. A classic example of this is an episode of the original The Odd Couple sitcom in which the two main characters enter a gambling contest and win a steak. One ill-placed bet, though, causes them to lose it all. 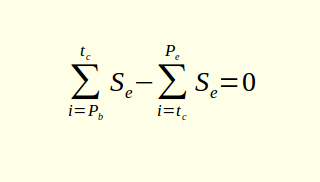 Where Pb is the Plot Beginning and Pe is the Plot Ending. Furthermore, tc or time critical, is the critical turning point of an episode. Se is the standard constant for comediometry for a story event. Thus, the sum of all story events until tc aka the critical turning point are nullified by all story events afterwards. Examples that differentiate this one from the previous can be a bit hard to explain, but the primary difference between the two is that the ending simply nullifies the beginning, while in this one emphasizes the fact that a plot can fluctuate as much as it wants, but that there will be a point in the plot in which things settle down afterwards.

For all episodes in STC the sum of all positive events, defined as those that ‘raise‘ a character’s situation, are nullified by events that lower it.

Once again, Pb is the Plot Beginning and Pe is the Plot Ending. Sp is the comediometric symbol for positive story points, points which in sitcoms theoretically ‘raise’ the situation. Likewise, Sn are negative story elements, which ‘lower’ the situation. The most salient example of this is the classic, and oft-attempted, multiple perspective episode. In these highly technical episodes, two or more characters in dispute each retell a different version of a series of events, often concluding with some central debate that prompted the differing versions. Here we have multiple plot lines, each with its own highs and lows. No matter the ridiculousness of the differences, though, order is always restored, even though the stories do not need to be justified. That is, we do not need to know which story was right, meaning that we do not necessarily have a tc that reverses all of the plot threads individually, nor an ending which addresses the particular problems brought in each thread. Instead, the ending usually address the larger issue, and the balance is kept by the other story(ies). In short, in these episodes, the positive aspects of one story version are contradicted by reciprocal faults in another story version and vice versa. Clear examples of this trope are to be found in all classic sitcoms, including but not limited to, The Dick van Dyke Show, The Odd Couple, and to use a relatively recent show Everybody Loves Raymond.
Controversy
As always, there is some degree of controversy, especially with the idea of STC. Many find that the equations are useless, arguing that there is no such thing as “true” STC. They also argue that there are too many exceptions to the rules, even at STC. Sitcoms are filled with episodes that do not end as the original situation dictates, just to be reset to their original defaults next episode. Most defenders of Sitcom Theory argue that, like the ideal gas law, the basic sitcom equations represent an estimated behavior of a nonexistent ideal that are mostly correct, and can be used to make educated guesses and estimations.

Needless to say Sitcom Theory, and Comediometry as a whole, are still developing and lively fields, expected to make great contributions to society.