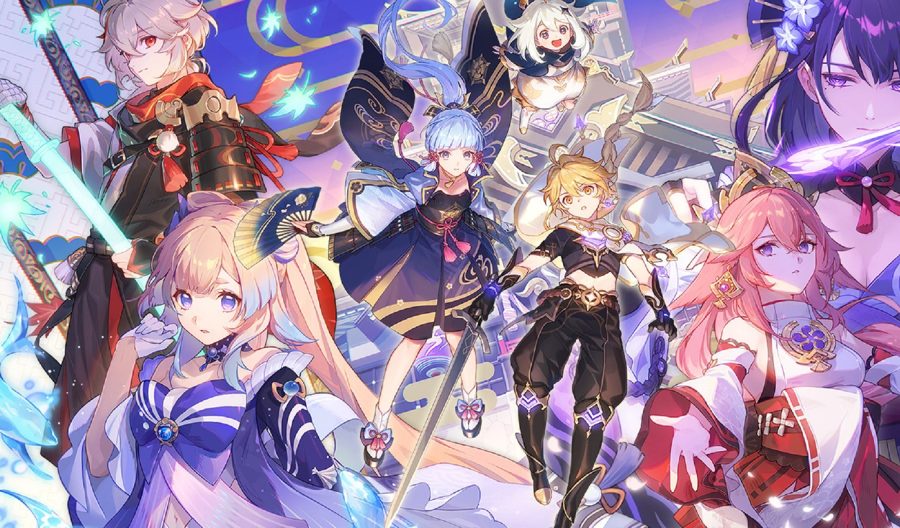 Genshin Impact is a open world role-playing game that took a good portion of the gaming community by storm just over a year ago. I had high hopes for this first anniversary, as someone who has played nearly since the original release. To understand my expectations, here are some brief pieces of information that should probably be covered before I dive into the article.

Genshin Impact is mainly known for incorporating a very uncommon system into the open-world RPG genre: the gacha system. Players get currency called primogems from quests and events that they can use to take their chances on the gacha, where they might get a character or a weapon. Five-star characters are featured on their special banners for about 20 days at a time, at which point they are no longer obtainable for some time.

These primogems are what makes all of the money. People spend a lot of money just to get the character they desire. To put the amount of money in perspective, this is how the pity system works.

To do a singular wish on your desired banner, you need a total of 160 primogems. The most common way players get primogems is by completing quests called “daily commissions” where players can amass a total of 60 primogems a day. Obviously, this is not a lot of primogems. To make sure that you have a 100% chance of getting the featured character you desire, you need to do 90 wishes. That means that you would need a total of 14,400 primogems, meaning that if you only got primogems by doing daily commissions every day, it would take you 240 days to get enough to guarantee that you will get the character you want. Events also tend to come out around a week and a half apart, with the average event granting an extra 420 primogems over a week. Some events, however, can give you over double that amount, such as the Thunder Sojourn event featured when the 2.0 update was released.

Now we need to look at how much primogems cost. To the left, you can see a chart of how many primogems you can get for how much money you spend. For $100, you can get 50 wishes. This game also applies the idea that you get a higher value per dollar spent, so you would not get 25 wishes from 50 dollars. Assuming that you were willing to spend all of your money in order to get the character, you would have to spend approximately $360. It’s possible you’d spend closer to $250 if you got the character when the chances went up, or you could just get lucky and get the character for free—unlike me.

People were expecting a lot of free primogems given out on the anniversary, and some even made a chart about getting a free five star character as seen in the picture below.

As you can see, this is a community-made concept, but many people expected to get rewards like this for the anniversary. Little did they know that those high expectations were going to be let down by a shocking anniversary reward.

This is what was released September 28th, Genshin Impact’s first anniversary. When I saw this, I felt it was slightly underwhelming. It was apparent that everyone else felt the same way, so much so that the game’s userbase grew restless. Many people were very upset at not getting a free five-star character, and more were upset at not getting a boatload of rewards. For those of you that don’t know, one intertwined fate is equal to 160 primogems, so people got 10 wishes as the anniversary reward. This is honestly kind of a low bar, and many expected much more to come from the developers as a “thank you” for playing their game. This is when even the developers realized that this was not enough and more needed to be added to the rewards to please the community.

This is the first gift sent out in the mail to all of the players. Four of these gifts were sent out in total, each one giving 400 primogems + something else as another added bonus. This meant players were getting an extra 1600 primogems, a wind glider (an in-game tool used as an instrument) and some more in-game related items. This was certainly a big deal for miHoYo, as they were not known for giving out much at all.

You would think that this extra bonus would be enough to keep the community at bay. I personally felt that this was more than enough for rewards, and so did the majority of my friends. However, the community did not feel the same way. The first noticeable sign of anger coming from the community occurred in the official Genshin Impact discord server.

Thus, the arrival of the Qiqi emotes began. Throughout all of the chats in the server, members started spamming this emoji nonstop as a sign of hatred towards the developers for not giving them even more rewards. To some this was no more than a meme, but to others it was a message to the developers: basically, “screw you.” This was also followed by an even bigger and more serious issue in the Google Play Store.

People took time out of their day to rate Genshin Impact with a 1* or lower rating just because they didn’t get a lot of rewards from the developers. This had a serious, well, impact on Genshin Impact and really showed how evil the community was.

These reactions from the community lead to the obvious question: are the developers really that greedy? The game already makes so much money and they didn’t give the community a whole bunch of rewards for their anniversary, so how bad was this?

The obvious answer is that the community overreacted. The developers gave out fairly good rewards overall. About $50 worth of materials and primogems were given out for free. That is a lot of money that they are practically giving away, and yet the community still felt that it wasn’t enough.

This whole series of events really goes to show how bad a community centralized around a certain video game can be. The fact that a community could push the developers of a game they love so much into such trouble over rewards that they didn’t even need to give out is honestly sad. I personally am grateful to the developers for making a game that has kept me playing for one year, whether they give out free rewards or not.