Diocese of Rochester: How We Got Here 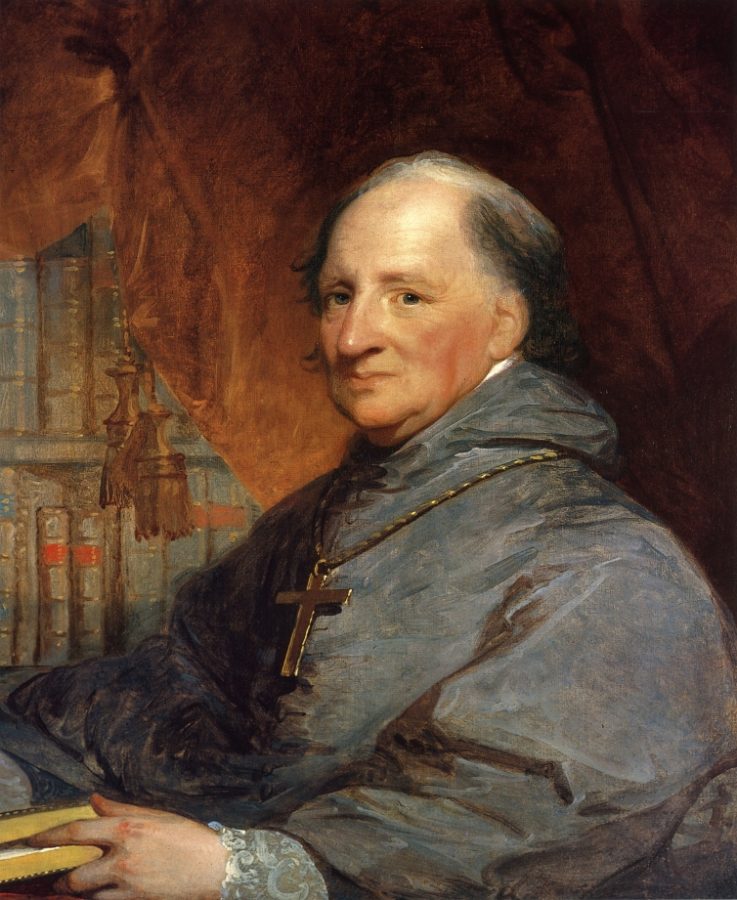 All the Catholic Bishops throughout the word today can be traced back to the original apostles of Jesus Christ. Apostolic succession is key in maintaining Catholic authority at the local level, through dioceses and their bishops. What follows is the construction of a lineage from our current bishop in the Diocese of Rochester, tracing Catholic succession back through time until tumultuous historical events make it impossible to find a previous connection.

Currently, the area of Monroe County, the Finger Lakes region and counties down to the Pennsylvania border fall under the Diocese of Rochester.
Bishops of Rochester

Bishop Sheen is famous for his evangelization in many forms, including television and radio shows. Sheen hosted The Catholic Hour on NBC from 1930 to 1950. He also presented Life is Worth Living from 1952 to 1957 and The Fulton Sheen Program from 1961 to 1968.

During his long tenure, Bishop Kearney significantly increased the Catholic population in Rochester. Along with increasing the number of priests and parishes, he was also central to the planning and foundation of McQuaid Jesuit High School.

Bishop McQuaid was devoted to the cause of Catholic education. The first bishop of Rochester was an admirer of the Jesuits after his time studying at St. Joseph’s Seminary at Fordham University. He wanted to bring a Jesuit institution to Rochester as early as the 1870’s, but members of the church hierarchy scuttled the idea. McQuaid Jesuit was founded by Bishop Kearney in 1954, and named in his honor.

Before Rochester had its own diocese, it fell under the direction of the nascent Diocese of Buffalo.

In the early to mid-1800s, the Diocese of New York led the Catholic faithful throughout the entire state.

The Pope established the Apostolic Prefecture of the United States (1784-1789) to separate the Catholics in America from authority in England. Shortly after, the Diocese (and later Archdiocese) of Baltimore was created.

John Carroll was the first bishop in the United States. The Carroll family was a prestigious group of brave leaders in the Province of Maryland and beyond. John’s older brother, Daniel, was one of only five men to sign both the “Articles of Confederation and Perpetual Union” and the Constitution of the United States. Charles Carroll of Carrollton, John’s cousin, was an important member of the Revolutionary Patriot cause and was the last surviving signer of the Declaration of Independence.
As a Jesuit priest, Fr. Carroll fought for a diocese to be created in the newly-independent United States while he worked as a missionary in Maryland and Virginia. He succeeded and was consecrated as the first American bishop. Bishop Carroll had many educational concerns, including the education of the faithful, providing proper training for priests, and the inclusion of women in higher education. He founded Georgetown College. Carroll oversaw the building of the first Cathedral in America, the Cathedral of the Assumption, in 1806 in Baltimore.

Apostolic Vicariate of the London District

Apostolic Vicariate of England (and Wales)

Archpriests of England (and Wales)

Our timeline is unfortunately cut short here. After Pope Pius V officially excommunicated her and called for her Catholic subjects to overthrow her, Queen Elizabeth I of England essentially outlawed Catholicism in 1581. The celebration of Roman Catholic Mass was prohibited and English subjects were required to attend the Anglican service. Catholic writings could not be published and seminary priests were forced out of England. English Catholics who sought religious education were sent to newly-created English Colleges in Italy, France, and Spain. Catholics were persecuted across the kingdom, and Elizabeth even ordered for her own cousin’s execution. Under the Queen, England murdered more Roman Catholics than any other country in Europe.

There was greater tolerance under the reign of James I, and Catholic authority was gradually re-established in England over many years. The Church used the Titular Bishop title so that a bishop with authority in England would not be recognized as such. The Pope generally used the name of an ancient Holy city for this reason.

Catholic authority can still be traced back further, but not with as direct and clear succession. As they look back on the astounding history of the faith, Catholics can be certain that the legacy of the Diocese of Rochester and its leaders is still being shaped today.