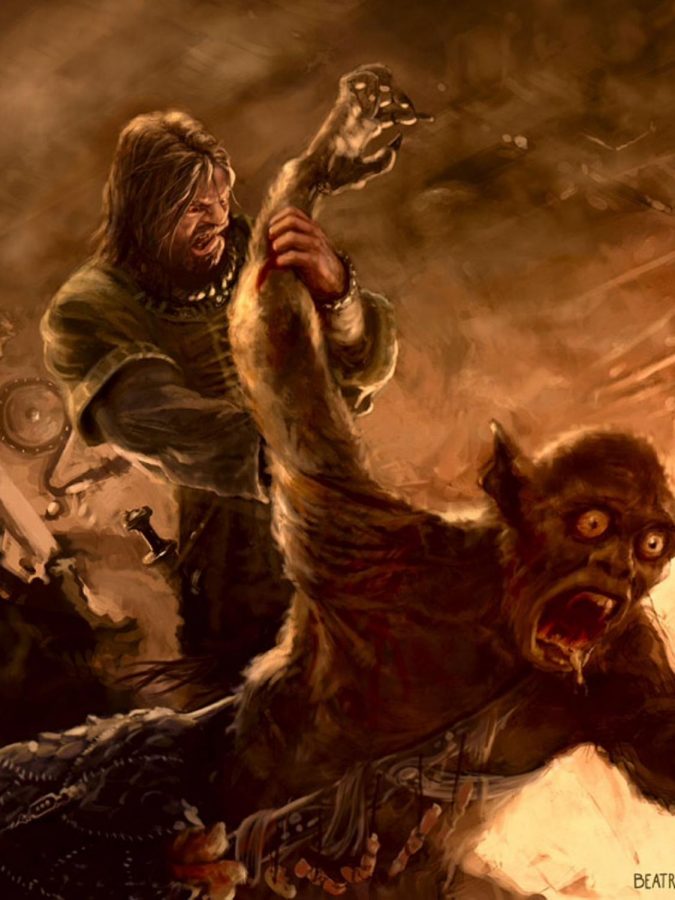 Bobby McCann, Swift in his Death-Dealing

I left you, mother, at such a young age,
and turned to sadness and sorrow and rage.
The Danes had family and friendship alike,
and they tasted better than sheep and the like.

They would fruitlessly run right away,
whenever I opened the hall to light from the day.
Then I began coming at night,
leaving them with quite a blight.

Never would I be normal like them,
they have their houses and I have my den.
We are different but close to the same,
at least I admit when I torture and maim.

My den starts its shaking and I thirst for blood.
My vision starts pulsing; I jump from the mud!
I feel myself rising up to new heights,
Never once plateauing under stars from new nights.

Each kill is like ecstasy calling my name;
I barge through the hall and start playing my game!
I scoop up three scores or more of riff from the raff.
Oh what a gaffe! . . . Only to listen to them shiver and shriek when I laugh.

Oh how they acted when they saw the den,
it became apparent they were new to the fen.
I gave them a welcome that cannot compare,
to the brotherhood bonds predating my lair.

Oh how many seasons had I undertook?
Campaigns of savagery back and forth like a rook.
Until came the most recent affliction.
He met me in a state of pure benediction.

Never before had I seen in my life,
a rival in everything but making stryfe.
He pulled me from my pent-up pulsating polarization,
red trails of bloodlust unraveling in a cessation.

I began shrinking in stature and size,
All the while staring at his dark blue eyes.
They were not wicked, surprisingly wise.

He constrained me with his bulking arms,
I could not grasp on any longer.
If it was not for my charms,
I would be prey for many a sword-monger.

I took off for my mother’s mere,
For my limb damage was seeming severe.
I alighted into the abyss,
the world started spinning and rushed forth a bliss.

My skin looked like a muddy snake,
even the whales would close up their lake.
Oh, mother, what could I do?
I rushed right home to see you.

I guess this is the end.
It’s only a matter of time before I start to descend.
All of that hoarding of weapons was for naught,
My time is dwindling regardless of what you sought.

All of my life you tried to protect me,
But now it looks like I will die by this black sea.
All of this was my fault,
for I started that great assault.

I might have been able to return to your den,
And maybe peacefully make some new friends.
My reasons?

Well, I guess I had none.
For, they were children of the Sun.
I was sprung forth from the grass.
I guess some could have foreseen my wrath.

They had their brothers and thanes,
bonds that would last all their days.
They went off to battle, that was true.
But I can’t help disregarding this in my purview.

We all went to battle, some justified some not.
But they returned with something that could not be bought.
It could not be claimed,
only if you were one of the famed.